Today's post comes courtesy of my friend Dr. Nicole LaVoi who is an expert in youth sport, coach and sport parent education, and girls’ and women in sports. She teaches sport psychology and sport sociology in the School of Kinesiology at the University of Minnesota where she is also the Associate Director of the Tucker Center for Research on Girls & Women in Sport, and Co-Founder of the Minnesota Youth Sport Research Consortium.

She's opened my eyes and mind to how female athletes are represented in the media and every time I talk with her I come away with a new possible perspective.  In short, she's smart, fiesty and fun.  I asked if I could share her blog post from a recent trip to China as I noticed many of the same things she writes about while I was in Hong Kong, though her observations were much more thorough than mine.  ....Brainiac.

I was recently given the opportunity to travel to China for the inauguration of the American Cultural Center for Sport at Tianjin Sport University in Tianjin China. Having never been to China, I tried to learn about and make as many observations pertaining to physical activity, sport, health and well being as I could.

I asked if obesity is a public health issue in China, and the answer was “yes it is a growing problem.” This response surprised me. I have observed but one overweight/obese Chinese person in 8 days in three of the biggest cities in China (Shanghai, Tianjin & Beijing).

The reason why obesity is on the rise in China I was told is due to lifestyle changes associated with economic development (i.e. more people can afford cars & scooters, and therefore engage in less active transport like walking or biking) and the introduction of Western fast food. The current US population is 312 million, and according the CDC more than one-third of U.S. adults (35.7%) are obese. The current Chinese population is 1.35 billion, and I found an article that stated obesity rates in China are soaring and more than 25% of Chinese adults are overweight or obese. This data and my observations while here in China are not congruent, so I’ll have to do some investigating and learning on the nature of this discrepancy.

What I did observe is active Chinese across the lifespan.

Public parks are used by older Chinese for many forms of physical activity, including 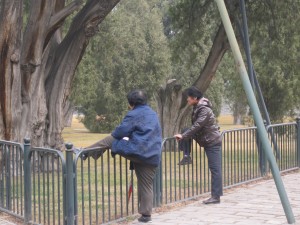 walking, ballroom dance, tai chi, and many others.  The outdoor circuit training stations equipment is really interesting and I haven’t seen anything like it in the US. The machines don’t provide any resistance, but are great for range of motion and keeping all body parts loose and working.  To that end, I saw many older Chinese using various park fixtures to stretch, massage or promote circulation, like the two women pictured here. 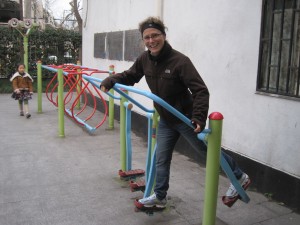 into daily life for older Chinese. The park is a public place they go for spiritual, social and physical health. I saw nearly all the groups I watched, laugh and smile and genuinely interact with one another. I did not see ONE cell phone. 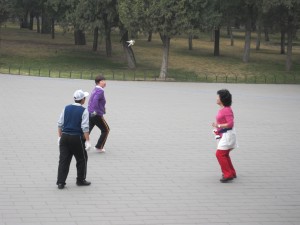 One game that I tried with some women, is Chinese Hacky Sack. I didn’t know what it was called, but with a quick use of The Google I discovered the Chinese Hacky Sack is called Jianzi. It is a special shuttlecock sport played with a colorful feathered article with a spring-loaded base that is kicked by feet with the goal of keeping it in the air for as long as possible. It was really fun, easier than hacky sack, and I worked up a sweat in 2-3 minutes.

The physical activities I saw appeared to be free and most had a peer leader/coach. 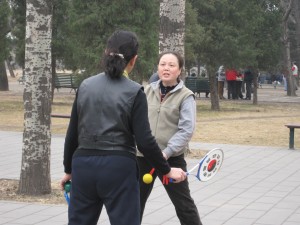 To the right you can see a woman instructing another woman on how to do Taiji Rouliqiu move. This physical activity is a modern kind of internal martial art originating from China which follows the principles of Taijiquan in its philosophy and in the motion. The students I saw ranged in age, but most appeared to be middle age or older. Lesson: it is never too old to be physically active or learn a new physical skill. It left me wondering what children and adolescents do for physical activity and if they engage in the same forms.

In the US when I drive past parks, I rarely see ANYONE using them, let alone groups of older adults!  With an aging US population, growing obesity rates, and unused green space, it seems to me market and opportunity exist for someone to seize.

Thanks Dr. LaVoi. What inspired me the most were these two sentences:  "Physical activity seems more playful, joyful and integrated into daily life for older Chinese. The park is a public place they go for spiritual, social and physical health. I saw nearly all the groups I watched, laugh and smile and genuinely interact with one another."  It would be great if we all approached physical activity this way instead of thinking of it as a punishment or more time away from family.

How can you integrate more physical activity in a playful, joyful, social way?