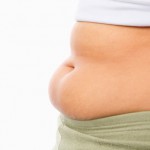 Do you ever find that no matter how much you exercise regularly or eat healthy, there's that bit of stomach fat you just cannot get rid of? You may think you got dealt a lousy genetic hand when it came to fat distribution, but what you might not know is that chronic fat around your midsection is likely due to stress.

One of the hormones released in response to stress is cortisol.(1) It plays a critical role in restoring balance in the body, and we wouldn't want to live without it. Historically speaking, the stress response was all about fighting and/or fleeing and we did a lot of it. When we did, it utilized the stress hormones the way in which they were designed.

Fighting and fleeing requires a lot of energy, so one of the roles cortisol serves is to "restock the shelves" by making us hungry(2). We needed to replace this lost energy, and do it in the most efficient way possible. Sugar and fat are rich sources of energy. It's no wonder we crave things like ice cream, french fries, chips and chocolate when we're stressed.

And what are the "shelves" that need restocking? The fat cells. Cortisol is very specific about where it stores fat on the body. It makes us deposit more fat deep within the midsection and is called visceral, or central, body fat.(3) It's very different from the subcutaneous fat stored just under our skin and is invaluable for the stress response. Visceral fat is closer to the portal vein of the liver, which means it can quickly be converted into glucose and then released into the bloodstream to provide much-needed energy for fighting or fleeing.(4).

Bottom line: When we're stressed, we're hungrier, we typically eat higher fat, higher sugar foods, and tend to store more of them around the waist.

So what can we do?

Get short bursts of exercise that mimic the fight or flight response! High intensity interval training combats many of the negative effects of stress.

Cortisol is released to fuel the short bursts of high intensity physical activity related to fighting and fleeing - and we need to use it for its intended purpose. When we do, we burn more body fat than long, steady state workouts.(5, 6, 7, 8) Researchers have found that high-intensity interval training produces a ninefold reduction in body fat compared to endurance training.(9)

It also significantly increases muscle oxidative capacity, which is associated with an improved ability to oxidize fats, or burn fat as fuel.(10) One study found high-intensity interval training increases fat use by 36 percent.(11) It not only increases fat burning during exercise, but for several hours to days afterward.(12)

All this means you're only sixty seconds to five minutes away from dealing with stress in a positive, healthy way. What are you waiting for?

To book Jenny Evans to speak at your next event, please use our contact form.

3. Björntorp, P. (1996). The regulation of adipose tissue distribution in humans. International Journal of Obesity and Related Metabolic Disorders : Journal of the International Association for the Study of Obesity. 20(4):291-302.